Back to all articles
Industry@FEATURED

I’m sorry for being so straightforward right upfront, but it’s true.

Every single day advertisers all over the world waste $51 M on digital Ad Fraud (Juniper Research).

Even though Ad Fraud is probably the number one problem in the performance marketing industry, advertisers still lack the knowledge to fight it. How about you? Do you know how to spot malicious activity, distinguish different kinds of fraud and implement suitable strategies? If not, you probably won’t be able to successfully protect your business and your users.

This is why I’m here today: to walk you through the whirl of Digital Ad Fraud and make sure you know all the right answers.

Our budgets and payouts are literally getting eaten alive, with a mindblowing $19 B lost over the year on Ad Fraud.

What is Digital Ad Fraud?

We’ve all been there. Running an offer that was supposed to make us very happy. Everything is set, profits are about to arrive, but when we look at the data something is wrong. The number of impressions grows, but… there are no conversions. Nada.

There are many answers to this question. Your ads might have been hidden or not shown, you might have received traffic which doesn’t match your targeting, traffic source crawlers or Google’s bots might have altered your number or… you’ve become a victim of Ad Fraud.

Ad Fraud is any deliberate activity that prevents the proper delivery of ads to the right people, at the right time, in the right place, aiming to generate revenue.

And unluckily for us, it awaits us at every corner of our complex advertising space.

Where is Ad Fraud?

Let’s assume that there is a manufacturer who wants to advertise his product. He wants to have someone else responsible for the promotion, so he finds a suitable advertiser.

They choose the ideal target group for the product and based on their assumptions, the advertiser finds the publisher with the right audience. The ad is seen by numerous users, some of them convert. Everyone is satisfied.

Because in the constantly changing advertising landscape there are many more players involved in the process: multiple Ad Exchanges, SSPs, Publishers, Agents. And all of them may be subjected to an attack. Even the premium players. For the advertisers, there are two main problems when it comes to digital fraud:

Having this in mind, we can distinguish digital Ad Fraud into two categories.

General Fraud is the most common type of Ad Fraud. More than 75% of fraud cases are linked to this category.

Fraudsters use various tactics to generate fake traffic like:

This kind of fraudulent traffic is relatively easy to detect if you use data included in a visit/impression string, click logs or conversion logs.

The second type of Ad Fraud is sophisticated fraud. And this one is a real…

…as even 0.6% of fraudulent traffic injected to a traffic source can stand for 99% fraudulent conversions.

It is quite rare but extremely hard to spot. Why? Because there are barely any mismatches. This kind of fraud is especially dangerous for CPC/CPA campaigns as it can mimic human behavior and score conversions through:

All of these methods make it hard to distinguish sophisticated fraud and block it. Only advanced metrics like click-to-install time distribution, user retention metrics, traffic distribution patterns (with clicks) or behavior on landing page patterns make it possible to spot the low traffic quality over time. 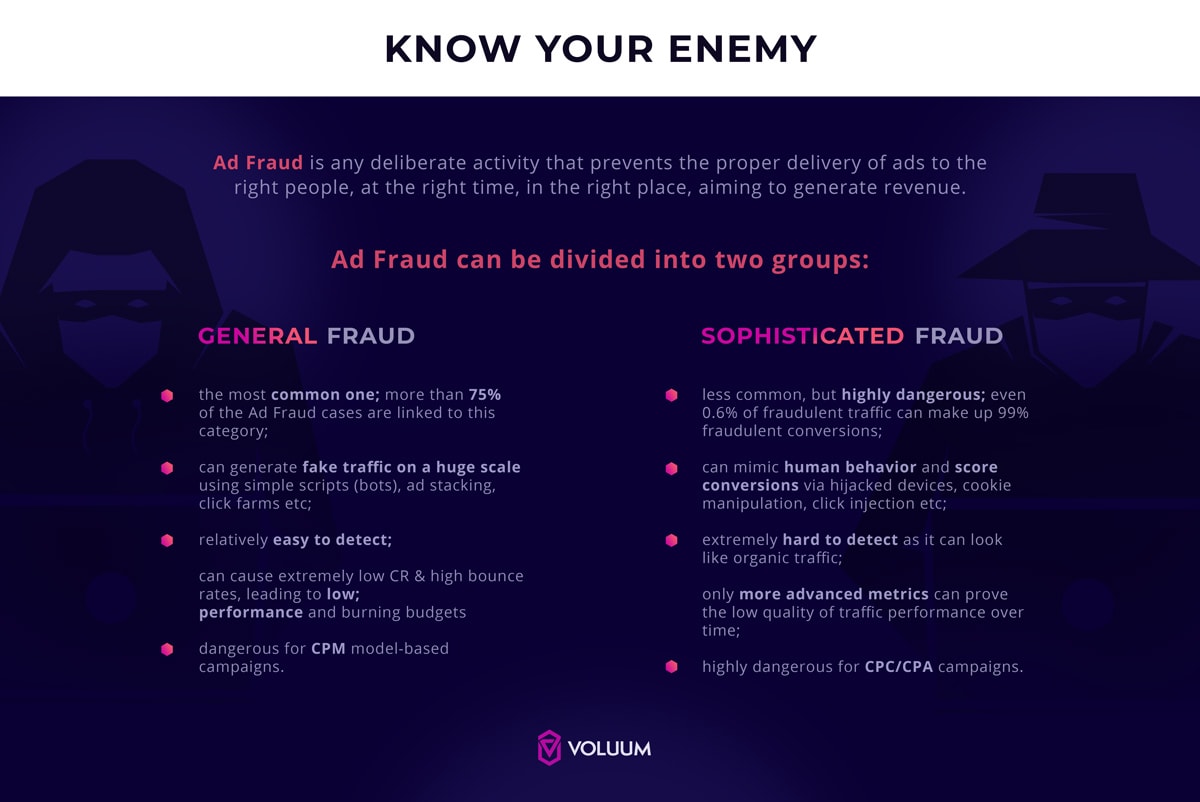 The current complexity and interconnectivity of the advertising ecosystem enable fraudsters to get more and more advanced in their marketplace exploitation.

The largest and most profitable Ad Fraud operation that we know of was Methbot. This sophisticated fraud conducted by a single group of hackers based in Russia generated $3 to $5 M in counterfeit inventory per day (White Ops).

Their army of automated web browsers used data centers in the US and Netherlands to produce massive volumes of fraudulent video advertising impressions. They “watched” 200 – 400 million video ad impressions on falsified websites, designed to look like premium publisher inventory per day. Result? More than 6,000 premium domains were targeted and spoofed, enabling hackers to attract millions in advertising dollars.

As the methods for perpetrating fraud become more and more sophisticated, there is a burning need in the advertising space to have a solution for detecting and managing fraudulent traffic.

A call for transparency

Click farms, spoofing, botnets, ad stacking – all these tools used by fraudsters to exploit the system take advantage of the lack of transparency.

And that’s when the market needs to respond by aligning supply and demand interests, increasing trust between everyone across the advertising spectrum. Creating close relationships between publishers and advertisers would make it much more difficult for fraudsters to abuse the market.

Of course, this isn’t something that will magically happen overnight. This is why you as an advertiser need to learn how to detect and prevent fraud to protect your viewability, performance, and reputation as soon as possible.

How? Read part II of the Digital Ad Fraud – A Complete Guide for Advertisers!

How To Use The Almighty Power Of Global Shopping Events