Back to all articles
The Newbie Zone@FEATURED

Self-hosted vs Cloud: How To Choose The Right Affiliate Tracking Software

While gamblers are usually advised to play their cards close to the chest, this philosophy is not easily transferable to the world of digital marketing. Affiliate tracking software comes in two forms: it may be self-hosted or operate in a cloud. So is treating your data like your cards a good idea or is affiliate marketing governed by different laws?

It may seem counterintuitive to let anyone from a SaaS company touch your precious data, however, this is one of the many things that we outsource to our trusted experts.

As data is your life, but so is your health, however you trust it to your doctor.

In the following article, I’d like to investigate the common fears and concerns surrounding keeping your affiliate tracking software in a cloud. This will not be a definite answer to the “What’s the best tracker for me?” question. In some cases, one option may appear to have more benefits than another. Although, when making such a decision, you ought to have a clear picture of the actual risks and rewards each solution comes with.

A basement server vs data cloud

Affiliate tracking software always consists of a nice front-end displaying your stats and charts, coupled with a backend that processes requests to a database. The key difference is in, where this software is hosted. In a self-hosted solution, you are the person responsible for purchasing or leasing a server,  maintaining it, and installing an affiliate tracking software. This server may be physical, located in your home or office, or virtual, found on the web. In the latter scenario, when you choose a VPS server from a company located “out there”, you are already half-way to a cloud-based solution. In theory, other people can touch your data.

Though, let’s look at some benefits of the prior option. Let’s say you are both tech-savvy and mistrustful towards big companies. Maybe you are more than capable of and willing to spend the time and effort in building and running a server at home. This way you can be sure all the clicks, redirects and postbacks are handled through your own set-up. Now let’s delve into how the second scenario works, which requires little effort and considerably less time:

Cloud-hosting refers to a situation where you lease a server or a bunch of servers from a company.

There are experts that will do that for you. When working with a cloud-based affiliate ad tracker, it is already installed on a remote server, that you ‘don’t see’. Fast, accessible, and secure. But is it the “you don’t see” part that worries you?

So, let me take you through different aspects of running an affiliate tracking software and we will discuss the pros and cons, risks and benefits of each one.

The first aspect, and at the same time the one that provokes the most heated discussions within forums, is speed. Most affiliate trackers do their job by simply redirecting a visitor through their system, so a visit can get recorded. Any delays in that process may have a negative impact on the visitors’ experience. No one wants to wait a couple of seconds for a web page to load. It’s 2019 and people are more likely to close a web page rather than wait 3 seconds for it. That’s how patient we have become.

There are many myths regarding speed in affiliate marketing. Most of them are unfounded or only partially true. Speed is one of the factors that make up a visitor experience. Other factors are your landing pages’ design and lure, the persuasiveness of the text and the offer itself. The key to success is to balance everything out: to have a fast campaign funnel that is always visually appealing.

Only part of the equation

The rule of digital thumb is that the closer the server is to your audience, the faster it works. With the self-hosted solution, you’d have to target your neighbors. Cloud-hosting is spread across many servers in many GEOs. You can target different countries and quickly jump between GEOs without having to deal with shady Vietnamese VPS’ hosting services, as you would with a “semi self-hosted” solution.

The above arguments about tracker speed refer to a ‘traditional’ tracking method based on redirects. The industry is shifting however towards alternative methods of tracking. They all involve scripts that are fired by a landing page or offer page. There are no redirects. A visitor goes directly to a landing page, and the aforementioned script makes a request to a tracker with visit details.

The overall time added to the whole campaign funnel is 0 ms. So most of the arguments about tracker speed lose their merit.

In truth, there is only one speed that should concern you when it comes to trackers, and that is the speed of loading a report. Generating one is a database-heavy task that most self-hosted trackers have problems with. Cloud-hosted trackers have databases designed to handle millions of requests.

It’s not only about a visitor’s experience, but it’s also about your experience.

The aspect of cost is also heavily-debated among affiliates. This is a sensitive topic, so let’s go into more detail.

Most of the trackers are subscription-based. This means that you pay a certain amount of money each month or each year. The difference between self-hosted and cloud-based affiliate ad trackers is in the method of billing per tracked event:

It may seem that a self-hosted solution may be a better option, especially if you track events in high numbers. This may be the case, but let’s take two points into consideration:

Why spend time setting up a server when you can spend time earning money? Your time is valuable! This is the main argument raised by self-hosted solution supporters. That your data is not secure unless it is located on ‘your’ server.

When these users talk about ‘security’, they usually imply that data located on their servers are secure not from attacks from hackers, but from the company itself. Like operating a cloud-based tracker is supposed to be some kind of elaborate scheme enabling the theft of your intellectual property.

That would be a very short-lived strategy. If even one super-affiliate would have spotted this, the rumor would have spread faster than you can say the phrase “company ethics”. It is much more profitable to run an ongoing, honest business than to make this one-time steal.

Talking about actual security, cloud-based affiliate tracking software have a team of dedicated and expert people hired specifically to keep your intellectual property and other data secure. They are good at their job because that’s their whole job. They are specialized, they don’t do anything else.

In the not so reliable world of being self-hosted, you have a duty to keep your data secure, whilst juggling at the same time design creatives, optimizing your campaigns or writing endless content for a landing page after landing page. That’s Bruce Almighty’s level of multitasking, by anyone’s’ standards

Maintenance goes hand in hand with security. Apart from keeping your data secure, cloud-based tracker companies also have specialists that keep their infrastructure operational and upgraded. In the self-hosted scenario, this crucial job also falls to you indeed a costly hired professional, whose fee adds up to overall costs.

Unoptimized servers tend to slow down over time. Reports take more time to load, clicks are getting lost. It is better to simply do your affiliate work without staring constantly on the “Fetching your data” message or similar text.

The last topic related to the whole security issue is backups. IT professionals say there are two types of people: those who do backups or those who will do backups. The latter ones will start doing them right after their first data loss, that is after they stop pulling their hair out.

Cloud servers are not located in one single location that can be affected by a power failure or a meteorite hit. They are scattered across the globe, with mirrored versions of themself as a backup, automatically updating and syncing, always on the go.

The usually overlooked, yet all-important missing part of this equation t is your data’s accessibility. When you operate your own server, you are tied to it. Meaning, if you want to check your stats or stop one campaign from eating through your budget, then you’ll be server sitting. That is unless you set up a secure connection with your server further adding to your ever-increasing overheads.

Cloud-based affiliate tracking software gives you the same freedom as other cloud services. You can check your data from any device connected to the Internet. Some cloud-based trackers offer a dedicated mobile app for this, while others provide you with a mobile-friendly web page.

Part of the affiliate game is adapting quickly to the changing conditions. You can do this while being stuck in your basement or while sipping a coffee in a restaurant. 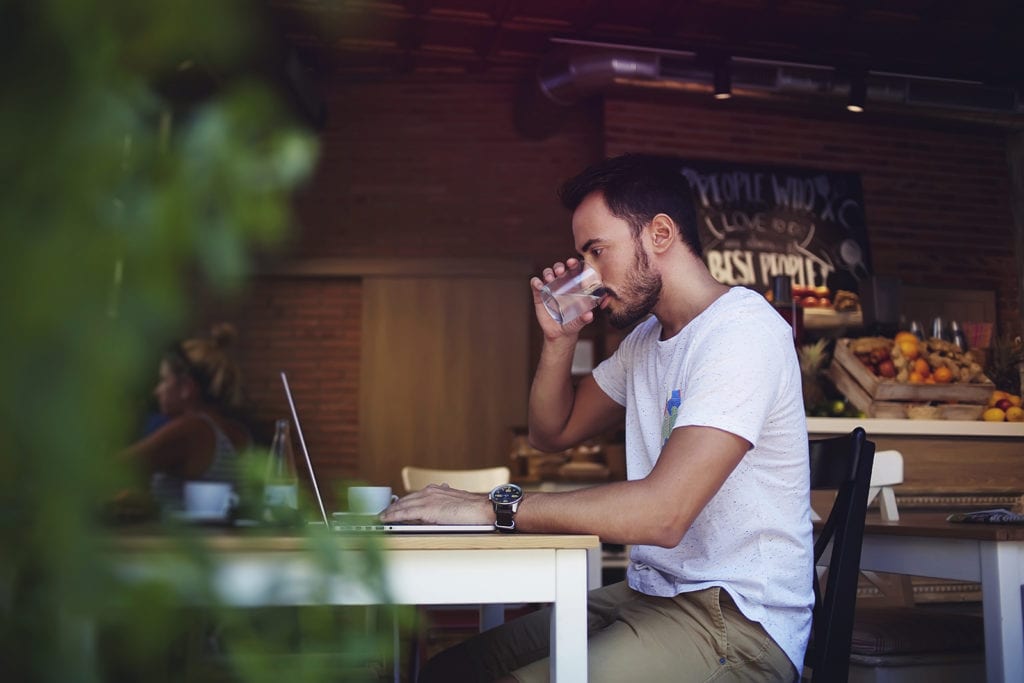 Let’s paint a picture where you have become a real success in affiliate marketing. Where you have struck gold and keep striking it with every new campaign! What would be a discerning affiliate’s next move?

With a self-hosted affiliate tracking software, it’s all about doling out more cash on upgrading and setting up a more powerful server that can handle more traffic.

With a cloud-based affiliate tracking software, it’s a glass of champagne and keeping that Gold Rush going, with more affiliate work that will continue to bring you more money.

Cloud-based trackers’ infrastructure and databases have been designed to withstand huge amounts of traffic. Because they charge per event, they don’t want to miss any chance to track each and every one of them.

Affiliate tracking software in a cloud

If it was allowed, gamblers would keep their cards in a cloud, so they could focus more on how the next hand will go instead of keeping their cards unreadable to other players. Unluckily for them, they do not have that option. You have.

Register now and start building a profitable hand with Voluum

A Facebook Campaign Worthy of Gods: The A-Z Guide