6H is one of the biggest advertisers on Taboola, and you don’t get to this position without external tools. They make an insane amount of money, and when they want to check how much they earned, or where they made the most money – they log in to Voluum.

Voluum is their weapon of choice when it comes to handling data tracking and split-testing. From checking the performance of each landing page variation to recording over 8k conversions every day, Voluum has put them on top of the advertising world.

Today, Nadim, a co-founder and CEO of 6H Agency, gives us a closer look into how they achieve excellence with Voluum.

How 6H Agency Came to Be

6H is a brainchild of veteran media buyers in the native ads space. Through tests and purchases on a scale unachievable for a single media buyer or even an in-house marketing team, they gained an expert knowledge in running and scaling native campaigns.

In 2021, this collective experience resulted in starting their own ad agency.

6H excels in quality lead acquisition & conversion optimization, especially in the US, UK and the DACH region. 6H became a premier partner for Taboola, aiming to create a real alternative to advertising on Facebook or Google.

So, what challenges do they face daily?

After years of being active in the native ad space Nadim knew one thing: there is no one right way to advertise. Everything has to be tested & tested again – then polished & then retested after some time.

This is what all those YouTube guides to digital marketing won’t tell you: there are no magic bullets, true efficiency comes from discovering and then discarding all the less efficient ways of doing things. The craft lies in knowing this and being able to spot how audience reactions change when you introduce a new design of a landing page.

For one of their customers from the insurance vertical, 6H uploaded and tested 600 landing pages with differing designs and content over the course of three years. The budget grew from 50K USD a month to millions a year.

For an e-comm client of theirs, 6H tested 400 variations in a span of 3 months before cracking the German market, and decreasing CPA’s by a factor of 4.

So how do you manage such volumes of data?

Managing your testing strategy with Voluum

Nadim has been using Voluum since the start of his time as a native buyer and then continued to use it after founding 6H Agency.

In his words: “We could not have achieved what we did without Voluum, period”.

Think about it for a second.

Millions of clicks x hundreds of LP variations x 30 plus data points on each click = Tons of data to be recorded, stored & analyzed

Luckily, Voluum was built to work with mountains of data. It has features that help to make testing easy and efficient, and an API integration with Taboola that allows you to automate

With such a data load, Voluum becomes an indispensable part of all marketing efforts. As CEO of 6H Nadim put it:

“Voluum is essential to Taboola – split testing content is a must if you want to succeed on Taboola.”

The perfection comes from the deep integration between Voluum and Taboola that ties the best of what both platforms have to offer into a marketing experience like no other. This integration allows both platforms to pass data in the background and control your Taboola campaigns from within Voluum manually or with auto rules.

How to test 1,000 landing page and not lose your mind

When it comes to Nadim, he relies on Voluum’s live data to assess the profitability straight away, in real time. He uses postbacks for reliable conversion tracking, simplifying tracking with clients by integrating Voluum and passing data back to traffic sources. When 6H onboards a client, they only need to set up one postback rather than a traffic source-specific tracking solution, saving time and getting projects going faster.

6H is an avid user of Rule-based paths, allowing advertisers to show different landing page variations to specifically outlined audiences: people from a select city, using a specific device type and so on. This allows 6H to tailor content to sub-groups on Taboola, allowing for more consistent conversion rates and higher profitability.

The success formula that Nadim follows is, at the end, very simple:

As of today, Nadim and his team comfortably track 7k – 8k conversion daily with Voluum.

When you design a landing page in the most optimal way, it means that any further adjustments would hurt your numbers. But things change, trends come and go, and people get bored with even the most polished design. This is why traffic still needs to be tracked and new ideas tested.

Voluum and Taboola combined are a powerhouse that, in the hands of competent marketers, can bring truly astonishing results. Get Voluum and advertise with the biggest players in your space! Read More
Industry
Advertising gambling is tricky. You need to make sure your offers come from quality sources and run campaigns… 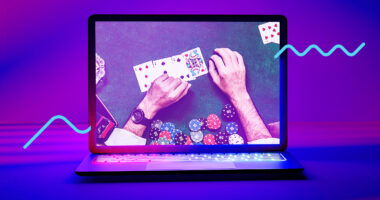 Read More
Industrystatistics
Worth about $300B, the iGaming industry is doing better than ever. In fact, it’s not just the sheer…