Sometimes all you need from a tool are stable servers, one fancy integration and that is it. Your profits double, as they did for our customer Digital Works.

Digital Works occupies an interesting niche of traffic arbitrage focused on TikTok. Read how Voluum enabled them to do their business efficiently.

What do they do?

Traffic arbitrage is when you buy traffic (in the case of Digital Works it’s native or social) and send it to a search query page, where each search result leads to an ad. This allows for displaying much more accurate offers, since there are two qualification moments (when clicking on the ad and when clicking on the search query).

Margins in traffic arbitrage are usually low, which makes it a big number’s game. Voluum was up to the task:

Digital Works focuses on using TikTok as their primary source of traffic.

How did Digital Works come to use Voluum?

The needs of traffic arbitrage companies

Voluum was the first choice for Digital Works because of its integration with TikTok. TikTok famously has problems with determining the correct ad spend. Plus, without Voluum, they had to do manual calculations – comparing the cost of a single click with earnings from an average click.

For Digital Works, the most important requirement for a tracker, apart from being able to handle large volumes of clicks with ease, were real-time conversions.

Feed providers in this business have data delays of 3 to 4 hours. Without Voluum, we would have to make an estimate of conversions.  It’s fine for low volume spend.  But for high volume spend, it’s very risky to not have real-time data.

Can you imagine waiting 4 hours for a conversion not to occur but to be registered? In today’s fast moving industry?

They needed a reliable and fast solution that could also work with TikTok.

How Voluum Helps with Traffic Arbitrage

As the famous-among-developers meme says, “There is no cloud. It’s just someone else’s computer”. This is true, but inaccurate. Voluum uses not one but several computers, or servers, located in different locations all over the world to be able to catch all user-generated events, including conversions, in almost real-time.

And that was the main thing that made Digital Works stick with their choice:

The main issue Voluum solved was tracking real-time conversions. Without a tracker, we would not get conversion data for a few hours which is very tough with higher spend volumes.

We at Voluum are sometimes skewed when it comes to looking into why people choose our product or our competitors. We sometimes think that there’s this epic battle between ad trackers, where each new feature is like additional troops that help to wage war.

Sometimes, or even most of the time, there is no war. Customers often don’t need automation, anti-fraud solutions or anything else. Sometimes all they need is a tracker that just works.

And has a built-in integration with TikTok that allows it to send conversion information to that platform.

We mainly use it for real-time conversions and to send conversions to Tiktok through the Automizer.

For those that want more from their tracking solution, Voluum allows them to set auto-rules that can pause their TikTok campaigns when set conditions are met or even change bids. There is a library of ready-made rules if you don’t know how to create a rule.

It’s hard to measure exactly how much money Voluum earned for them. The best word that describes it is ‘skyrocket’. They managed to get 100% more revenue.

However, it is easier to calculate costs that didn’t need to be paid thanks to Voluum.

Voluum can also work with other traffic sources that only accept conversions via pixel (Facebook and Google) and feed them with conversion data obtained via postbacks. It’s a versatile tool with capabilities extending far beyond traffic arbitrage and affiliate marketing.

Check out Voluum for yourself or buy it now!

Map User Journey: How Voluum Can Help Your Ecommerce Business Read More
Case Studies
Voluum is truly a versatile tool. Some people use it for traffic arbitrage, others for campaign management, lead… 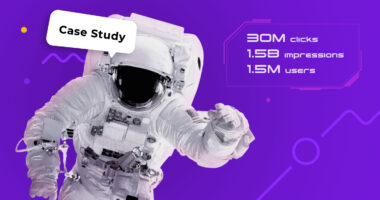